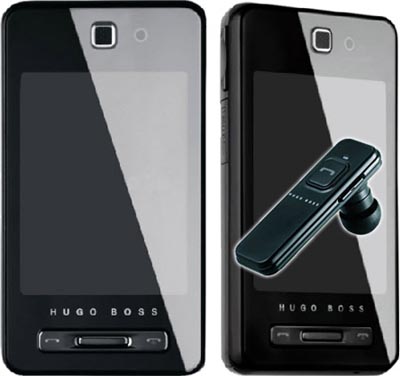 Despite the economic crunch and everyone tightening their grasps on their wallets, Samsung is still attending to the higher-end of the market with some rather exclusive handsets. In the past, we’ve seen phones like the LG Prada and the Samsung Armani. Now, we’re turning to yet another design house to find the Samsung F480 Hugo Boss Phone.

The actual features and specifications on this designer handset are much the same as its non-designer counterpart. It’s still a Samsung F480 under the hood, but it comes along with some Hugo Boss fashion laid over top of it. An extreme makeover goes a long way in taking something from hamburger steak to filet mignon.

The core features found in the Hugo Boss Samsung phone include a large 2.8-inch touchscreen display, an incredible 5 megapixel camera, full HSDPA support for high-speed wireless data, Bluetooth, and an integrated media player. The TouchWiz user interface has been included as well, but Hugo Boss probably added its own dash of style as well.

Surprisingly, the Hugo Boss Samsung F480 doesn’t carry that much of a premium over the non Hugo Boss phone. It’ll retail for 479 Euro, which isn’t exactly cheap, but you can probably find some Hugo Boss clothing that costs a lot more than that.