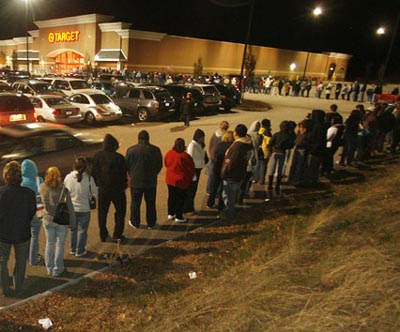 It’s an annual tradition. After stuffing yourself with roast turkey and pumpkin pie for Thanksgiving, you catch the first thing smoking towards your favorite electronics retailer. Yes folks, Black Friday is upon us and despite all the financial woes that afflict us, I have the strangest feeling that Black Friday will be just as busy as it ever was. In fact, with this economic crunch, the turnout might be even bigger, because people are getting more and more desperate to find the best possible deals.

Do you have a plan of attack? Are you prepared to brave the crowd, fending off soccer moms and rabid preteens as you reach for that special Mario Edition Nintendo DS Lite? Before you head out to grandma’s house for your Thanksgiving feast, you might want to get through this Black Friday gadget shopping guide.

A lot of people approach Black Friday without a real plan of attack. They’ll just head to the biggest shopping mall in the area and look for whatever deals happen to catch their eye. This is not only a waste of time, but you’ll probably miss out on the best deals if you take this route.

Instead, you should definitely surf your way around the Internet for any leaked Black Friday ads from the biggest stores. All it takes is a quick Google search to find the leaked flyers for places like Best Buy and Wal-Mart. After sifting through the mountain of advertisements, you’ll want to determine what it is that you want most. Is it a new digital camera? MP3 player? Giant HDTV?

Don’t make a regular shopping list, because this may prove rather ineffective on Black Friday. Instead, prioritize your items. What is it that you want the most? The second most? It’s unlikely that you’ll score all the door crashers, so you’ll have to pick only a handful (and grab a few others while you’re there).

Well, it’s not completely true that you can’t take advantage of all the deals. You won’t be able to do it alone though. That’s where an army of friends and family will come in handy. You would have already shared enough quality time with one another during Thanksgiving and you’ll get back together again near the end of December, so you really don’t need to experience Black Friday in each other’s company.

Instead, split up. You’ll probably want to stick to the same general area, but you can leave one person in front of Target, another in front of Sam’s Club, and so on. There’s no sense in five people hanging out at Best Buy to buy the same stuff. Divide and conquer. If these people are truly your friends, you can probably develop enough trust that you guys can work out the finances after the fact… assuming they have the money.

Anyone who has survived the epic phenomenon known as Black Friday will know that it can be an absolute battleground out there. It’s scary trying to trample over grandmas and hormone-infused teenagers. 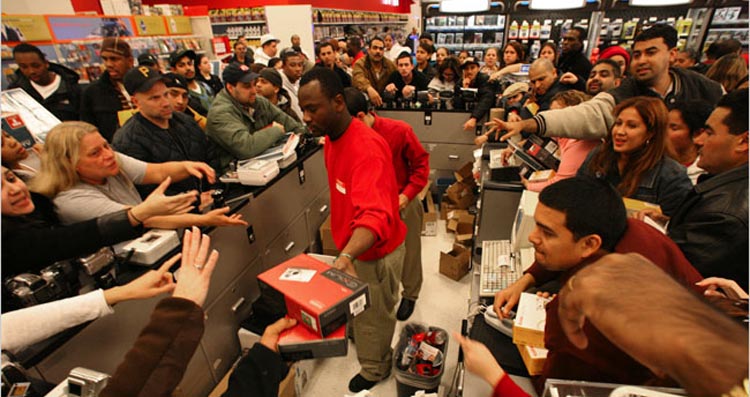 To keep thing simple, you may prefer to plop yourself in front of the computer on Friday and do your shopping online. Be forewarned, however, that some of those website servers won’t be able to handle the traffic and your online shopping cart may freeze or run into other problems. That said, at least you don’t have to brave the cold.

It might be a little crazy, but you can hit two birds with one stone by carrying around an Internet-connected device like a netbook or an iPhone. While waiting in line in front of your chosen store, you can still be shopping at some online store at the same time. Ideally, you’ll want wireless broadband (EVDO/HSDPA), though many areas will blanket you in some “free” Wi-Fi as well.

Sleep Off the Tryptophan Instead

Easily the single best way to survive Black Friday is to skip it altogether. Don’t wait in line. Don’t camp outside some store. Don’t fight your way through website traffic in hopes of clicking the “finish my order” button. After consuming all that turkey and stuffing, you may need some time to recover from the tryptophan anyway.

Yes, there are some savings to be enjoyed during Black Friday, but the most savings you can enjoy is by not buying anything at all. After all, there’s always the post-Christmas sale too.