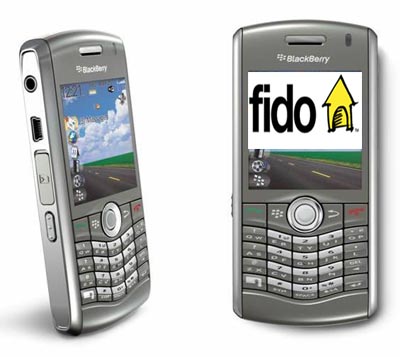 It was reported a short while ago that Fido was expressing interest in bringing true BlackBerry support into its portfolio and now it seems that the dog will be getting its ‘berry sooner than expected.

I thought it was wishful thinking for Fido to get its paws on BlackBerry support in time for the holidays, but now it’s being said that Research in Motion’s popular smartphone line will be hitting the dog house as soon as the second week of December. That’s the target launch date and it seems that the initial offering will be the BlackBerry Pearl 8120.

Not surprisingly, this Pearl is pretty similar to the entry-level Pearl that you’d find through someone like Virgin Mobile. The whole point is that this phone, along with its stellar service, can offer customers a BlackBerry experience without a hefty enterprise price tag. It will be available, they say, in Oyster Pink and in Grey. An exact price has not been mentioned, but it should be pretty cheap.

Looking forward to Q1 fo next year, the BlackBerry 8220 Pearl Flip could be joining its non-flipping Pearl brethren in the dog house for about $50 with a two-year contract. Personally, I think the Pearl Flip is a great fit for the new budget- and consumer-minded pooch.

In related news, Rogers Wireless will be picking up a few new handsets from RIM as well. They say that the BlackBerry Curve 8900 (Javelin) will hit shelves in January for $150 (with three-year contract) and a pink BlackBerry Bold will be forthcoming as well. A pink Bold? I wonder if they mean the front face or the leather back… or both.