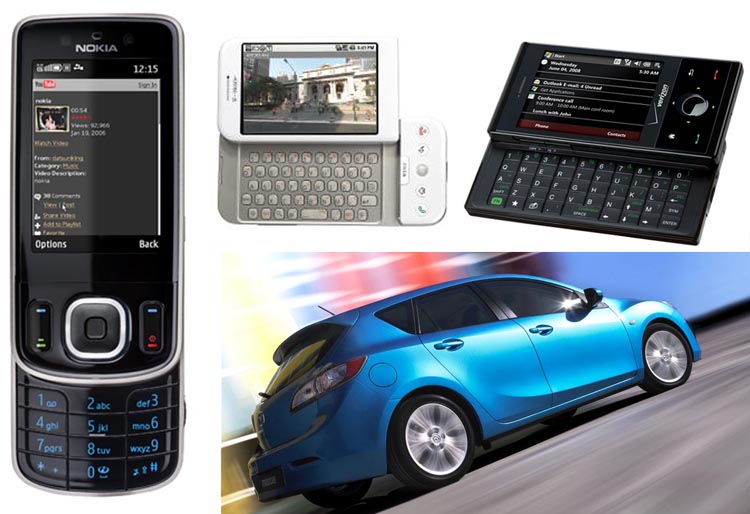 Even though the economy is taking a bit of a downturn and everyone is starting to wind things down for the holidays, the tech industry is keeping busier than ever with all sorts of interesting doo-dash to dive into your wallet. Let’s see what’s going on.

For the more fashion-conscious among us, there is the new white version of the T-Mobile G1, which will launch this Monday. This is in addition to the existing black and bronze models and the white G1 will retail for the same $180 asking price. Google Android just got hit with a splash of snow.

Set to wow the multimedia-inclined is the Nokia 6260 Slide. It may not be quite as sexy as a N-Series smartphone, but the 6260 Slide gets loaded with an impressive HVGA display and a 5 megapixel camera. Look for it in Q1 2009 for 299 Euro.

If you’ve been looking to stay connected everywhere you go, you’ll be glad to hear that the Dell Mini 9 is now available with 3G. No longer do you need to feel bound to Wi-Fi hotspots. The HSDPA upgrade costs $125, but you can recover $120 of that with a w-year AT&T data contract.

Turning our attention to security, Lenovo is instituting a feature that allows users to lock ThinkPad laptops with SMS. Dubbed Lenovo Constant Secure Remote Disable, this feature allows a user to send an SMS message from a designated phone using a designated key code and it will remotely lock down the laptop.

The unlocked and unbranded GSM verson of the HTC Touch Pro is still too rich for my blood, but you can go to Verizon to find its version on sale now as the Verizon XV6850. This HTC Touch Pro Windows Mobile smartphone appears to be the same as the one being sold through Telus and Bell. Look for it on Monday for $350 with a two-year agreement.

With the new Fido branding as a budget cellular provider, there’s word going around that the dog will lose the iPhone next year. In this way, the only legitimate way for Canadians to get the iPhone will be through big brother Rogers Wireless. A sad day for Fido and Apple fanboys alike.

Turning to the automotive world, we are offered a good glimpse at the 2010 Mazda3 Hatchback. This redesign appears more streamlined that the current model and it’ll be powered by the same 2.5L engine as the Mazda6i, giving you access to 167hp and 168 lbs-ft of torque.