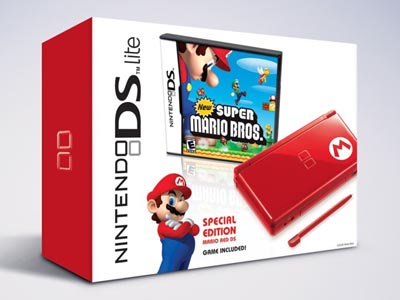 While this wouldn’t be quite as nice as getting a brand new Nintendo DSi this holiday season, it could be the next best thing for the Nintendo fanboy in your life. There is no shortage of special edition Nintendo DS Lites on the market, but very few have the same kind of retro appeal as this New Super Mario Bros. Limited Edition model.

This special Nintendo DS Lite is fully dressed up in Mario Red throughout, so whoever is playing games on this thing will certainly stand out from the crowd. You’ll also notice Mario’s “M” insignia on the cover, though it will appear as a W (where’s the Wario edition?) when the DS Lite is opened.

In addition to the special edition Mario Red DS Lite, this bundle also comes with a copy of New Super Mario Bros. The game isn’t exactly new anymore, but anyone buying a new DS Lite will want to have this game. It’s got great 2.5D graphics and retro-inspired gameplay that will satisfy both hardcore and casual players.

If Nintendo’s famous plumber isn’t your kind of thing, Nintendo is also offering another bundle for the same price. The alternative bundle includes an ice blue DS Lite and a copy of Brain Age. I don’t know about you, but I’d rather get Mario than Dr. Kawashima.