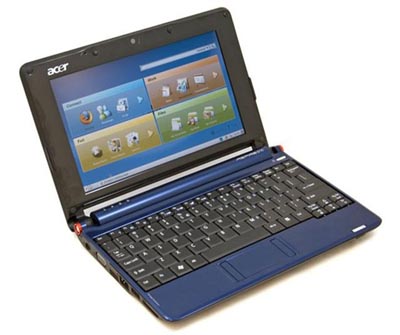 As netbooks continue to gain popularity, as does the demand for netbooks that are a little bigger than the wee 7-inch Eee PC that started this whole trend. The existing Acer Aspire One features an 8.9-inch widescreen display, but some people want something a little bigger. And Acer plans to deliver.

That’s the good news. The bad news is that Acer won’t have its new Aspire One ready in time for this holiday shopping season. Instead, the first 10-inch entry into the Aspire One netbook line won’t be hitting retailers until some time next year.

An exact date has not been specified yet nor has a formal announcement been made by the people at Acer, but the rumblings on the web are pointing toward “early next year” with a likely launch somewhere in the February to March window. The current Aspire One is one of the more affordable netbooks, so I’d imagine that its 10-inch variant will be more of the same.

Personally, I’ve found that the build quality on the Aspire One just isn’t up to snuff when you compare it to other netbooks like the Eee PC and the MSI Wind. I guess that would explain, in part, why Acer’s offering is a little less expensive than its Taiwanese brethren.

On a related note, Acer is continuing to expand its presence in the netbook and notebook market beyond just the Aspire One. It has been noted that Acer will start manufacturing some 13.3-inch notebooks under the Gateway brand next year. As you know, Gateway is a budget-minded brand as well.