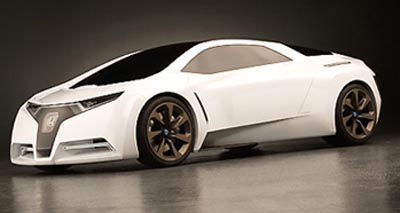 The guys in Detroit may be suffering through some pretty tough times these days, but Honda’s R&D department appears to be perfectly alive and kicking. As we try to move as far away from the gas pump as possible, we take a gander at the remarkably hot Honda FC Sport.

As you may be able to surmise, the FC in FC Sport stands for fuel cell. That’s where this crazy sports car derives its name, roughly making use of the same drivetrain components as the FCX Clarity. Personally, I think the FC Sport looks a heck of a lot better than the FCX.

The fuel cell stack sits up front, granting random passers-by the opportunity to gaze at the space age-looking technology that powers this beast. To further improve the performance on this potentially track-happy vehicle is its very low center of gravity and improved weight distribution. The battery sits somewhere in the middle, just in front of the electric motor. Hydrogen serves as the fuel.

The bad news is that the Honda FC Sport is more proof of concept than anything else and it will never make it into production. The good news is that this concept car can serve as indication as to where Honda is heading both in terms of fuel cell technology and in terms of design cues.

Can you imagine if they were to create an NSX successor that was based on this design and similarly powered by fuel cells? That’d be nuts! (And cost a fortune, I’m sure.)