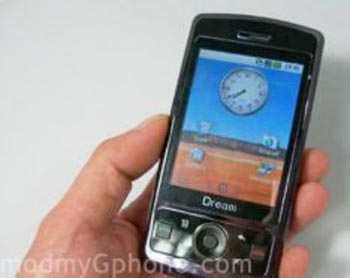 With a name like the Sciphone Dream G2, you would think it’s safe to assume that this phone is an upgrade over the HTC Dream G1. While both handsets are powered by Google Android, the Sciphone Dream G2 presents a number of very confusing features. Well, there is one very notable element that’ll definitely keep you scratching your head for some time.

With no direct relationship to the HTC Dream G1 (T-Mobile G1), as far as I can tell, you really have to look at the Sciphone Dream G2 somewhat in isolation. That said, it does share the same Google Android operating system as the G1, so there are certainly comparisons to be made.

Unlike the HTC Dream G1, the Sciphone Dream G2 appears to lack a physical keyboard altogether. This is in line with devices like the Samsung Omnia and Apple iPhone, except there’s one major problem here. Android, as far as I’m aware, does not currently have any support for on-screen virtual keyboards. If you don’t have a physical keyboard and the touchscreen can’t act as a keyboard, how the heck are you supposed to use this thing?

And it doesn’t stop there. The spec sheet, while making mention of EDGE connectivity, makes no mention of any 3G radios. That’s a very curious omission, would you say? Other features include Wi-Fi, Bluetooth 2.0 (with A2DP), 4 megapixel autofocus camera, 50MB internal memory, FM radio, 2.8-inch QVGA display, and microSDHC expansion. Some have said that the build quality is quite poor as well.

I can’t imagine why you’d still be interested in the Sciphone Dream G2, but if you must know, it’s set to launch next Friday.