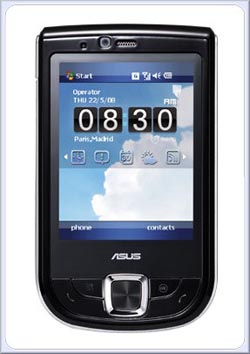 Earlier this week, I told you about the Asus P565 PDA Phone and how Asus said that it was the fastest smartphone available on the market today. We don’t like phones that lag and hang, so this sounded like a pretty great proposition.

Even so, how fast is fast? The Asus P565 is powered by an 800MHz Marvell processor and in the video below, you can see just how fast this processor can go. Asus just released this clip to show you exactly how much faster 800MHz can pump along the data compared to a suitable competitor. I can’t say for sure, but I think that’s an HTC Touch Diamond on the left.

The demonstration goes through a rather intense 3D animation, a task that is usually pretty heavy for a mobile processor. Asus says that it’s the world’s fastest and, based on the fluidity of the clip shown below, I’m inclined to agree.

Whereas the Asus P565 rocks an 800MHz processor, the HTC Touch Pro only has a 528MHz processor, as does the Sony Ericsson Xperia X1. The Palm Treo Pro is even slower at 400MHz, but the iPhone 3G gets a little closer with its 620MHz CPU isn’t much better with its 412MHz processor (thanks darling8 for the clarification). I’d imagine that the speedier processor would dig into battery life, but that’s a small price to pay for so much speed.