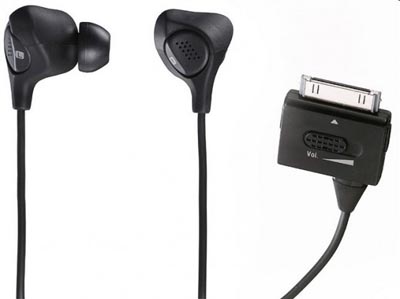 Why hadn’t they thought of this before? We’ve bot a bevy of speaker docks and FM transmitters that make use of the iPod dock connector, so why can’t headphones do the same thing?

I could very well be wrong, but I think these are the first iPod earphones that I have ever seen that actually connect to your Apple music player using the iPod dock connector rather than the standard 3.5mm jack. Offered by Hitachi Maxell, these earphones offer a couple of major advantages over their 3.5mm counterparts.

For starters, you are getting a true digital connection with your iPod so there is less lost in quality. This is why FM transmitters designed to use the iPod dock connector typically offer better sound fidelity than the ones that use the 3.5mm stereo jack.

Naturally, the HP-NC20.IPs is not without its faults. Because it draws power from the dock connector, this severely affects the battery life of your iPod, draining it by as much as 66%. Furthermore, the volume controls on your iPod won’t work, so that’s why there is a volume slider by the dock connector itself. The other downside is that while these work with iPods (including the 2nd-gen touch), they won’t work with the iPhone.

Set to launch in Japan on December 12, the Hitachi Maxell HP-NC20.IPs will carry a retail price of about $80.