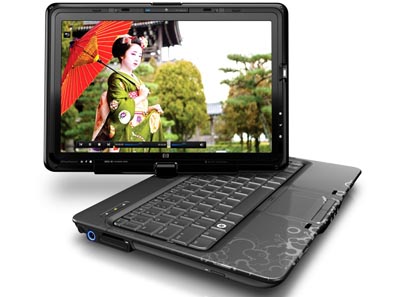 Believe it or not, it’s not sexy enough to have just a regular old touchscreen anymore and that’s why HP is leaping ahead with the new HP Touchsmart tx2 laptop. The difference? This thing’s got multitouch going on.

While Apple’s MacBook line lets you do the multitouch thing on the trackpad, the HP Touchsmart tx2 actually lets you enjoy full multitouch functionality on the 12.1-inch screen. This is a convertible tablet PC, after all, but it’s the first consumer-oriented model to have multitouch built into the display.

It will recognize two simultaneous points of contact, whether they be via your finger or a stylus. The downside is that the multitouch will not work under all circumstances. Instead, the functionality is only meant to be used with certain preinstalled software.

More specifically, the multitouch caters to the Mediasmart 2.0 software, a suite that lets you watch movies, look at photos, play music, watch TV on demand, and so on. HP has partnered wtih MTV networks to bring content from MTV< Comedy Central and Nickelodeon. The multitouch will also work with Office, web browsers, and photo applications. Rounding out the specs are a 2.16GHz AMD Turion X2 processor, ATI Radeon HD 3200 graphics, 8GB RAM (nice!), 500GB HDD, Bluetooth, webcam, DVD burner, VGA out, and a digital pen. Prices start at $1150 with shipping commencing at the end of this month.