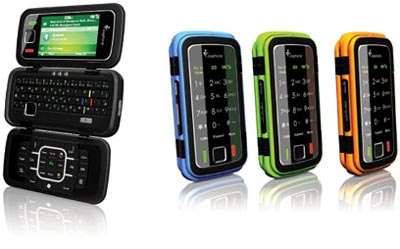 I’ve seen some pretty creative form factors in my day, but the IcePhone truly is something that is out of this world. Whereas the Helio Ocean offered a unique three-layer double-sliding mechanism, the IcePhone can unfold into three distinct pieces. It’s a triple-flip!

Powered by Windows Mobile 6.0 Pro, the IcePhone is a pretty niche device and based on the assortment of colors shown here, I’d imagine that it’s targeted more at the youth and casual markets rather than at business types figuring out their finances on Wall Street. The entire front face acts as a touchscreen, but you can flip the phone open once to reveal a full QWERTY keyboard. This is similar to the LG Voyager.

Where the IcePhone separates itself from the crowd is with the next flip, which reveals a gaming controller and keypad. This probably makes it a little more awkward to use than what it’s worth, but you’ve got to hand it to them for making such a creative design.

Rounding out the rest of the conceptual specifications are 3G high-speed connectivity, a Freescale iMX31 532 MHz processor, 3.1 megapixel camera, GPS, and WiFi. A company known as The Medical Phone Ltd. is trying to shop the design around to see if anyone bites, so we have no idea whether this will ever make it into production.