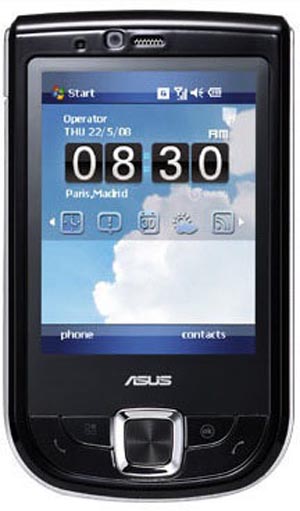 Cell phones are so much more than just cell phones these days, especially when it comes to smartphones that are bordering on full-on computer territory. Pushing the envelope even further is the newest smartphone from Taiwan, the Asus P565 PDA phone.

While its outward appearance is rather unassuming, looking much like the other touchscreen smartphones in the Asus lineup, the Asus P565 is one crazy speed demon. How so? Well, it just so happens to have a super fast 800 MHz Marvell processor under the hood. This processor will help deliver “system performance beyond anything else on the market.” Thanks in part to this processor, the phone will have no trouble with “heavy multitasking” either.

There is no physical keyboard on this phone, choosing instead to rely on the 2.8-inch touchscreen display. The resolution on said display is a formidable 480 x 640 pixels, so you’ve got plenty of space for icons, text, and applications. Other notable features include a business card recognition utility, Microsoft Mobile Office, tri-band GSM/GPRS/EDGE, 3.6Mbps HSDPA, 802.11b/g Wi-Fi, microSD expansion, USB, Bluetooth, and an integrated SiRFStar GPS chip.

Flipping around to the back, you’ll find a three-megapixel camera that will also do video at up to 24 fps. Also on the back is a slate of leather, not unlike the BlackBerry Bold. No word on pricing or availability, but given its tri-band radio, I don’t think the Asus P565 will be making its way to North America any time soon.