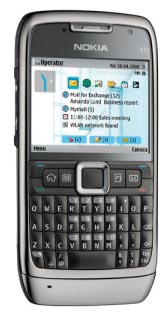 Before Fido got repositioned in the marketplace as a budget brand, there was word swirling around saying that the dog would be getting this awesome Symbian hotness. Well, given the penny-pinching philosophy that now occupies the dog house, this QWERTY wonder is not going to the pound. Instead, it’s going to its business-oriented bigger brother.

Rogers Wireless has now confirmed that it will be picking up the Nokia E71, a great Symbian S60 smartphone that has been widely acknowledged as one of the best of its breed. Rogers has not announced a specific release date, but it is saying that the Nokia E71 will be “coming soon to Canada.”

As you may recall, some of the key features on the Nokia E71 include its QWERTY keyboard, HSPA connectivity, Wi-Fi, 3.2 megapixel autofocus camera, GPS, and up to 8GB of memory. One of the coolest things about the E71 is that you can have two separate home screens: one for personal use and another for professional purposes. This allows the E71 to better cater to both sides of your balanced life.

If you don’t want to sit around and wait for Rogers to sell the E71 to you, it is very much possible to find unlocked and unbranded handsets online for about $500. Alternatively, you can wait for a bit and get the more affordable Nokia E63 instead.

The E63 is fundamentally the same, but it lacks Wi-Fi and it replaces the camera with a 2-megapixel fixed focus shooter. Retail price on the E63 is in the $250-$300 range unsubsidized… and I think that’ll be close to the with-contract price for the E71 from Rogers when it becomes available.