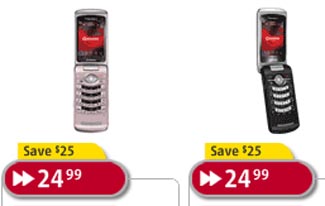 Just because it happens to be the latest hotness from Research in Motion doesn’t mean that the new BlackBerry Pearl Flip is expensive. In fact, you can get your hands on this flipping wonder for less than $25.

Future Shop in Canada has a habit of undercutting the suggested retail price for many with-contract cell phones and the electronics retailer has taken its most recent chopping block to the BlackBerry Pearl 8220 Flip from Rogers Wireless. If you were to buy the Flip directly from Rogers, it would cost you $50 with a qualifying contract.

However, if you bounce on over to Future Shop, you can save yourself an extra $25 and nab the Pearl 8220 for just $24.99. You still have to sign that lengthy contract, but you get the added bonus of a $25 Future Shop gift card to boot. That could be used to buy a protective case, a new DVD, or maybe you can put it toward an Xbox 360 or something.

Ironically, the BlackBerry Pearl 8220 Flip is still going for about $150 from T-Mobile, so while Rogers and T-Mobile don’t compete with one another directly, I’d hope for the sake of BlackBerry-loving Americans that T-Mobile offers a better deal during the holidays for this phone.