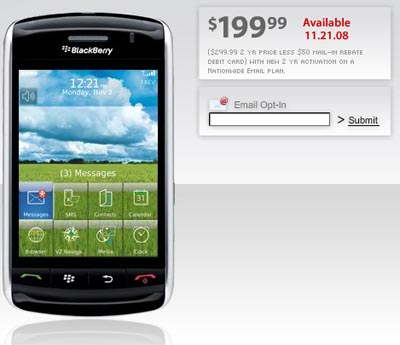 Are you getting excited about the prospects of the world’s first touchscreen BlackBerry? The wait is almost over, because Verizon has officially announced all the launch information regarding this hotly anticipated handset.

Remember how earlier reports pointed toward a surprisingly expensive BlackBerry Storm? Thankfully, those earlier reports were a little off the mark, because Verizon plans on selling the Storm for just $199. That’s much better than the rumored $350 price point based on the insider scavenger hunt.

As can be expected, the $199 price point requires a new two-year contract and you also have to deal with a $50 mail-in rebate. Even so, getting the BlackBerry Storm for under $200 sounds pretty reasonable to me.

In terms of release date, Verizon Wireless has selected Friday, November 21st as the day for the BlackBerry Storm. On that day, VZW will start dishing out the Storm both through brick-and-mortar locations as well as the online store.