We’re not quite ready for Windows Mobile 7 just yet, but Microsoft’s Steve Ballmer has officially confirmed that the company will be releasing Windows Mobile 6.5. Just as WM 6.1 brought all sorts of upgrades over WM 6.0, we can expect all sorts of interesting updates for WM 6.5.

So, how will this new mobile operating system look? We’ll have to take these leaked screenshots with a grain of salt, but we could be taking our first look at the Windows Mobile 6.5 user interface. As you can see from the left shot, it seems that accessing the various functions is done from a honeycomb pattern rather than a grid.

From what I can gather, the right screen must be the home screen (or some variation), granting you quick access to your most frequently used applications, as well as the clock and weather report. I hope this isn’t the new home screen, though, because I want at a glance info for tasks and appointments.

Overall, you can see that Windows Mobile 6.5 is much more aesthetically pleasing that its predecessors, possibly taking a page out of HTC TouchFLO and Asus Glide. The appearance of the top taskbar is still pretty similar though.

Naturally, we have a reason to be skeptical about these leaked screenshots. The battery meter and signal strength icons are switched in the two pictures, and the font for the soft key buttons near the bottom are different sizes too. Then again, we could be looking at multiple early concepts and not the final product. 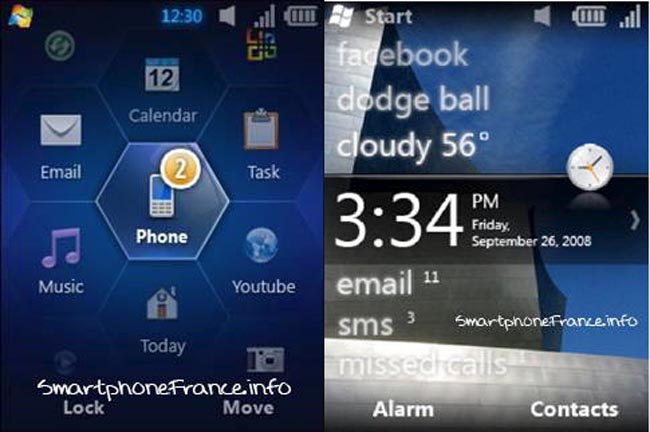