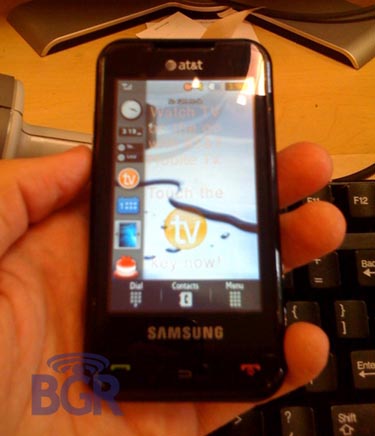 Yup, cell phones with full face touchscreens are all the rage these days and AT&T simply is not satisfied with just selling the Apple iPhone 3G. The iPhone may be a pretty popular device, but some people (for whatever reason) may be swayed to look elsewhere for something like the Samsung Instinct or the Samsung Omnia.

In order to capture this Samsung-loyal crowd, AT&T is set to release the Samsung A867, which will be marketed as the Samsung Eternity. The Boy Genius got hands on with the new handset and it looks to be quite the brilliant little number. The TouchWiz user interface appears to be similar to the Omnia and you will notice that it is not a true smartphone. Not everyone needs a smartphone, after all.

Poking through the spec sheet, you’ll discover that the Samsung Eternity from AT&T will get loaded with 3G, MediaFLO full screen TV, GPS with AT&T Navigator, and a 3 megapixel camera. It’s also one of hte most affordable “new” touchscreen phones on the market, because AT&T will be tossing the Eternity for just $99 with a two-year contract and a $50 mail-in rebate.

Some of the positives from Boy Genius’s initial hands-on include the super crisp display, nifty auto-rotation feature for a landscape QWERTY keyboard, and the nice slim profile.