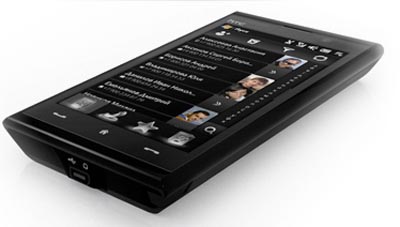 Ever since HTC released the HTC Touch Diamond, it has become abundantly clear that the company is putting much more of a focus on creating aesthetically-pleasing phones. From the jet black finish to the glorious displays, HTC phones are now more beautiful than ever. That’s not to say that HTC has forgotten about the tech side, though.

Shown here is the newly revealed HTC Max 4G, the world’s first GSM/WiMAX cell phone. From what I can see, the form factor is similar to the Touch Diamond or the Touch HD insofar that the Max 4G has done away with the physical keyboard in favor of a full touchscreen interface.

The biggest inclusion, of course, is the WiMAX component for speeds as high as 70 Mbps. Unfortunately, the WiMAX only works with the Yota network through Russia’s Scartel.

But wait? Doesn’t Sprint already have its XOHM WiMAX network up and running in the United States? Well, the trouble there is that the cellular network for Sprint is still CDMA-based, so the GSM side of the HTC Max 4G wouldn’t exactly be compatible with its network anyway. There might also be some differences in the WiMAX network used by Sprint and the Yota network used by Scartel of Russia.