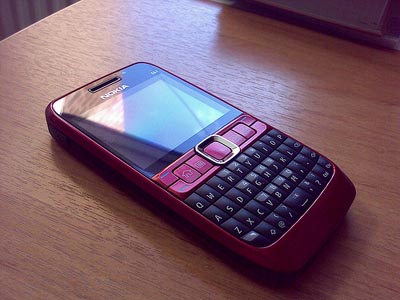 It’s not out of the ordinary to find spy shots and leaked information on the Internet before a company officially announces a particular product. At that point, the information is largely of the rumor variety, so we always take it with a massive bucket of salt. However, this is possibly the first time that a company has completely acknowledged the existence of something prior to its official unveiling.

For whatever reason, it seems that Nokia has started to ship out review units of the Nokia E63 smartphone even before the Finnish phonemaker has made any sort of official announcement regarding its existence. This has to be an industry first and it’s a sharp departure from the standard procedure. Maybe they got some embargo’d information or something.

Anyways, what you see here is the Nokia E63, a QWERTY packing smartphone that has a very similar bar-style design as the Nokia E71. A few lucky bloggers have already gotten their hands on trial units, though it’s a little unclear whether these are the full retail models or if they’re still in beta-testing, so to speak.

I wonder if any of these lucky bloggers are breaking embargo by already writing about their hands-on sessions with the Nokia E63. If so, Nokia may stop shipping stuff early and, if that happens, everyone loses.