While iRiver is not exactly a household name in North America, the Reigncomm brand has done quite for itself in its native Korea. You’ve probably seen a few iRiver MP3 players and portable media players kicking around on online stores, but this is the first time that I’ve heard about an iRiver-branded mobile phone.

As it turns out, iRiver is just as interested in the touchscreen cell phone phenomenon as anyone else, so it will soon be launching an aluminum finish mobile phone that borrows a few styling cues from the Apple iPhone. Yup, the company that you may already know for MP3 players is making the jump into the mobile phone market.

As with similar handsets that you’ll find from LG and Samsung, the iRiver cell phone lacks a physical keyboard opting instead for a full touchscreen user interface. Other notable features include handwriting recognition, multiple dictionaries, Wi-Fi connectivity, and embedded access to the Bugs Music Service. I’m not terribly familiar with Bugs, but I’m guessing that it’s a Korean counterpart to the iTunes or Amazon MP3 Stores.

iRiver is keeping pretty mum regarding any further details, but based on appearances alone, this unnamed handset is quite the looker. The full aluminum body looks positively stunning, but I’m wondering if all that metal affects call quality and reception at all. Remember that Apple ditched the aluminum back on the original iPhone in favor of the plastic back on the iPhone 3G.

It’s far from confirmed, but people are saying that the iRiver touchscreen phone will launch next March. 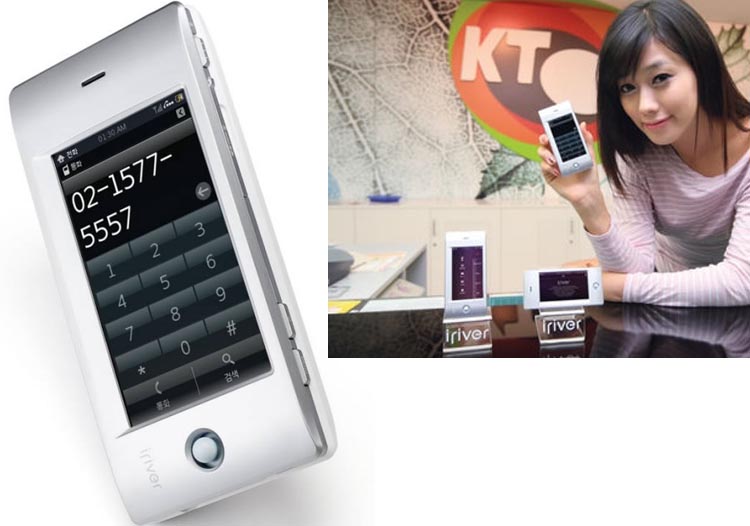