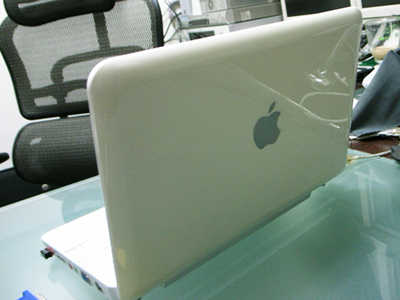 Early last month, we caught a glimpse of what appeared to the MacBook Mini. It didn’t take long for people to figure out that it was simply an MSI Wind netbook that had be re-fashioned to include a glowing Apple logo and that’s about it. Well, the rumors are a-brewing again, because we are once again treated to another supposed Apple subnotebook.

Although it’s not particularly clear if that Apple logo lights up like a real MacBook, you have to admit that this faux MacBook Nano is pretty convincing. Apple purists will be able to detect the non-Apple components pretty quickly, but you can see how something like this would easily fool the casual passer-by.

Just as before, the fake Apple MacBook Nano is a modified version of the MSI Wind. The glossy white appearance is in line with some of Apple’s earlier styling cues, but this fake Apple isn’t just flaunting it on the outside. Notable upgrades include a mammoth 320GB hard drive and a hacked install of OS X Leopard. A full set of pictures can be found on Flickr.

So, this leads us right back to a question I asked a while ago. Would you buy an Apple MID or UMPC? Would you be more interested in a Mac netbook of some kind? I think that Steve Jobs and the rest of the Cupertino crew could do quite well for themselves in this market, even if the MacBook Nano is advertised as a premium netbook with a slightly premium price.