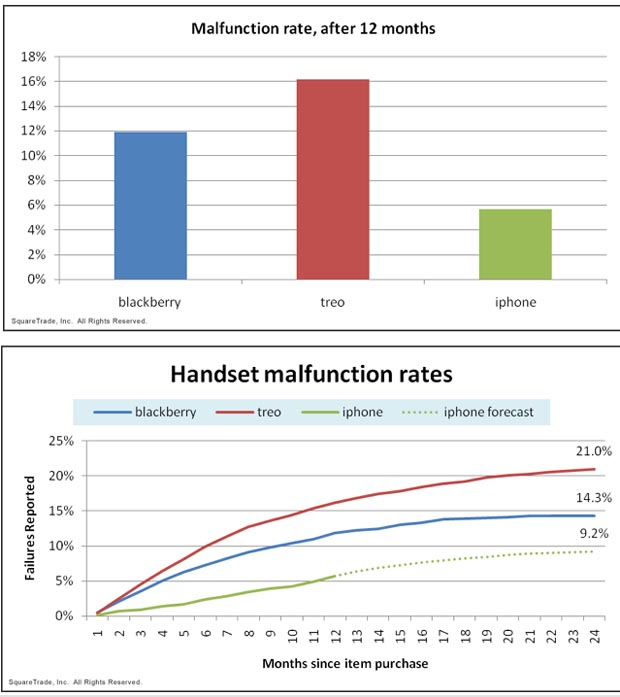 Most owners of BlackBerry devices love their smartphones and a big part of this has to do with BlackBerry reliability. As it turns out, however, the BlackBerry is not the most reliable smartphone on the market. It’s the iPhone.

SquareTrade is a company that sells extra warranties for cell phones and other devices, so you could say that it knows a thing or two about the relative reliability of different electronic devices. Naturally, this study was based only on reported data and there could be some users out there who just “put up” with problems rather than having their phones fixed through the warranty process. Even so, we have to go with what we have and what we have is saying that the iPhone is twice as reliable as the BlackBerry.

These stats are based on the first year of ownership. The iPhone had a reported malfunction rate of 5.6 percent. By contrast, BlackBerry devices had a malfunction rate of 11.2 percent and the Treo had a rate of 16.2 percent. The study did not include Symbian or Windows Mobile phones, so we’re not really sure how those fall into the equation. It would be interesting to compare the malfunction rates of phones from Nokia, HTC, Sony Ericsson, and so on.

Getting back to the SquareTrade study, it predicted that the failure rate for an iPhone within the first two years of use is between 9.2% and 11.3%. The predicted failure rates for BlackBerries and Treos are 14.3% and 21.0% respectively. The most common problem across the board had to do with touchscreens and keyboards. Far fewer issues were reported concerning call quality and batteries.

It should be noted that 12% of iPhone failures is simply due to the owner dropping it, spilling coffee on it, or otherwise having an unfortunate accident with it.