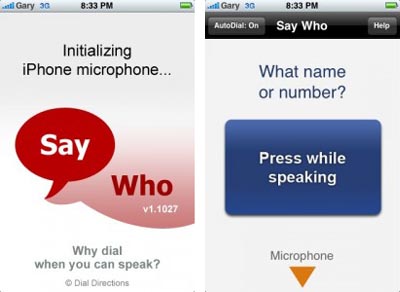 As great as the iPhone 3G may be, it’s not without its faults. For whatever reason, it doesn’t do copy and paste, and it doesn’t do voice-dialing. Well, at least that second part has now been alleviated with the recent release of the “Say Who” app available through everyone’s favorite App Store.

Voice dialing is a standard feature on a lot of mobile phones these days, even though most people never really make use of it. Even so, most of these phones require you to “train” it to recognize what you say. For many of these, you have to make a voice recording for each and every entry in your phone book, but if you’re lucky, then you may only have to take the phone through a general training program.

Well, Say Who for the iPhone does them all one better: there is no training required whatsoever. It’s just basic speech recognition, so you can call just about anyone in your phone book by simply saying their name. To use the voice dial feature in Say Who, you boot up the program, wait for the microphone to activate, and then hold your finger on the screen as you say a contact name or number.

According to Gary from iPhoneInCanada.ca, Say Who was accurate about 90% of the time. It’s not perfect, but it was able to recognize Gary’s voice reasonably well, even when he tried to trick it with Terminator-esque deep tones and Mickey Mouse-style high-pitched voices. It’d be nice if there was a quicker and easier way to launch Say Who, though, because phones that come preinstalled with voice dialing only require you to hold the talk button, for example.

The good news is that Say Who is completely free, so you really have nothing to lose by giving it a try.