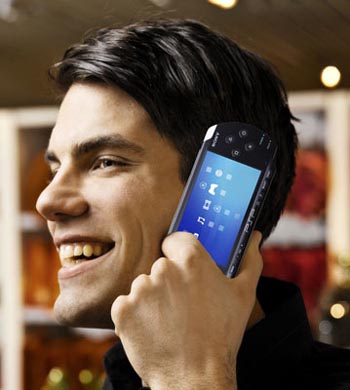 Nintendo and Sony have been at each other’s throats ever since the original PlayStation hit the market to compete against the Nintendo 64. The relationship between these two giants is quite the storied one, because the PlayStation was originally developed for Nintendo. They had their differences of opinion, parted ways, and the rest is history.

The competition continues to this day, as we see the Sony PS3 battle it out in the same playground as the Nintendo Wii. Yes, they are very distinct systems with distinct strengths, but they’re both home gaming consoles. Heading over to the portable market, the competition is just as fierce.

If you cast aside the iPhone for a moment, I think that you’d agree that the Nintendo DS and the Sony PSP are the dominant offerings in portable gaming these days. Nintendo recently released an updated model, dubbed the Nintendo DSi, offing a similar form factor as the DS Lite, but with several notable upgrades. It’s available in Japan and should be coming to North America some time next year.

Even though Sony has a newer PSP with a brighter screen and slimmer profile already, I have a burning suspicion that another update could be in the works that responds directly to the new NDSi. How will Sony react? What will be its countermove?

Pfft… I Already Have That

As rivals, Nintendo and Sony have a tendency to borrow “inspiration” from one another when it comes to innovation for their respective products. The Nintendo DSi brings several features to the table that Sony has been touting with the PSP for years. The initial reaction from Sony, in this way, is near utter disregard. Been there, done that.

For example, the NDSi has extra RAM, because it needs to keep up with some of its newer features. First, the GBA slot has been abandoned for a more conventional SD card slot. Looking at the PSP, it’s been rocking Memory Stick Duo cards since its introduction so many moons ago.

The Nintendo DSi also has a built-in music player. Guess what? The PSP plays music too, right from the Memory Stick. Unlike the DSi, though, the PSP can play video files to boot. If it weren’t for homebrew, the DS couldn’t do that either. There is no official video watching support on the DSi.

The DSi happens to have dual cameras. One faces the gamer and one faces away from the gamer. Nintendo says that there will be games that take advantage of this functionality at some point in the future, but the gaming handheld is already loaded with rudimentary software for taking and editing pictures. You can add various effects and that kind of thing.

Sony’s been bandying around with the Eye Toy on the home console front for a while now, even though the accessory never really took off. It’ll gain in popularity with Little Big Planet for the PS3, maybe. In any case, I don’t see why Sony couldn’t include a basic camera (Eye Toy) on a new PSP. I realize the divisions are somewhat separate, but since Sony Ericsson camera phones use Cyber-shot technology, it shouldn’t be hard to send some of that over to the gaming side.

PSN On The Go

Over on the Nintendo DSi, Nintendo is going to have an online store that can be directly accessed from the DSi, granting gamers the opportunity to download new content and buy DSiWare. Seeing how the PSP already has WiFi and rudimentary online functionality, it wouldn’t be hard to grant PSN access to the PSP too.

Can you imagine having legitimate and wireless access to classic PSone games on your PSP? How about cool “small” games being developed by smaller game studios? Sharing accounts (and account balances) between the PS3 and PSP would be nice.

While this is not at all directly related to some of the upgrades found on the Nintendo DSi, I think one of the greatest things that Sony can do for a new PSP is to finally offer a second analog stick. Dual analog sticks are the norm on the home PlayStation and Xbox game consoles, and they need to give the same level of control on the Sony handheld.

Other possible upgrades would be things like improved battery life, bigger screen, and (unlikely) possibly the removal of the UMD drive. Bear in mind that the entirety of this article is little more than personal conjecture, but if Sony were to make a PSP2 or PSPi (or whatever they want to call it), I think the additions described here are well within the realm of reason.