Perhaps one of the most hotly anticipated phones of the year has to be the Sony Ericsson Xperia X1. The wait is finally drawing to a close, because the Xperia is coming to Best Buy as early as next month! That’s right. If you’ve been a good little boy or girl all year and you’ve saved up all that couch change, then you just may be able to nab the latest sliding hotness from Sony Ericsson in time for the holidays.

Some secret ninjas from within the confines of Best Buy have come across some information in the system that points toward the imminent launch of the Sony Xperia X1a. The “a” part of the name, as with so many other Sony Ericsson phones before it, signifies that this is the North American version of the phone. This means that we can fully expect America-friendly 3G support in this phone too.

As you recall, the Sony Ericsson Xperia X1 is a Windows Mobile smartphone designed and manufactured by the good people at HTC. Just as many of HTC’s WinMo phones feature the TouchFLO or TouchFLO 3D interface, the Xperia X1a comes equipped with a new “Panels” interface that is apparently exclusive to Sony Ericsson. This makes Microsoft’s smartphone operating system a little more pleasing to eye. Other notable features include the large touchscreen display and slide-out QWERTY keyboard.

Based on the leaked screenshot, Best Buy (that’s in the United States, by the way) will have the Sony Ericsson Xperia X1a on store shelves in early December. More specifically, the slide points toward an “in stock date” of December 7th, though that may shift in either direction as the date draws a little closer. That’s the good news. The bad news is that you may need to dive a little further into your couch in search of spare change, because the tentative price for an unlocked phone is $799.99.

Hopefully AT&T will pick up the Xperia and offer us a subsidized price in the near future. 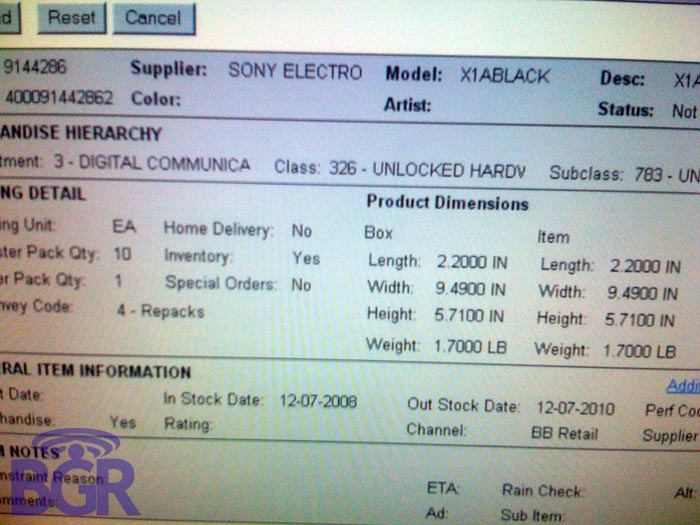