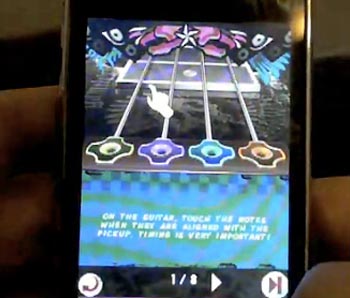 We’ve seen a few Guitar Hero clones developed for the iPhone in the past, but Rock Tour could be one of the most impressive offerings to date. As you can see through the video below, this game is not comprised of just lines and dots.

Just like the rhythm games that you can play on a DS or Xbox 360, Rock Tour for the iPhone (and iPod touch) features full 3D graphics. When you’re playing, you have Guitar Hero-like characters jamming along in the background. You’ll also notice that the note variation is pretty impressive as well, including sustains and Rock Tour’s version of Star Power.

Developed by Gameloft, Guitar Rock Tour is “the only game on the iPhone where you play guitar and drums like a rock god.” Yes, you have the option to play virtual drums on here as well and it won’t take a set that occupies precious real estate in your living room. Yeah, it’s probably not as satisfying as wailing on a physical drum set, but at least it’s portable.

The track list sounds pretty decent too, because Gameloft was able to secure some licenses for real songs like eat It, Girlfriend, Smoke on the Water, and Rock You Like a Hurricane. Find Guitar Rock Tour in the App Store.