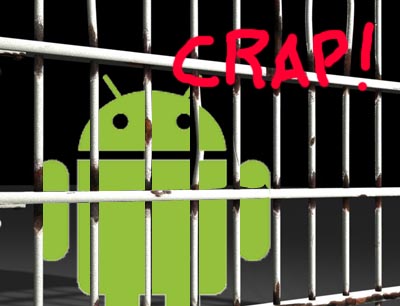 Unfortunately for the little robot that could, Google has decided to send out an automatic update that addresses the “issue” of having the Android OS jailbroken by the rogue online community.

It was only a couple days ago that someone found out how to jailbreak Android. The process for jailbreaking the T-Mobile G1 wasn’t really the same as creating a jailbroken iPhone, because it wasn’t about being able to laod non-approved applications. It was about gaining root telnet-like access to the platform. You know, like how they do with Linux.

Well, it seems that Google saw this as a security issue. As a result, an automatic update (RC30) is being beamed out over the air to all the Android owners in the audience to patch this vulnerability. The update will be pushed out over the course of the next few days and the open source code base will be updated to reflect these changes.

Yup, Android is back in prison, but it’s like a white-collar prison. He’s probably not behind bars and he’s still getting fed with a whole bunch of open-source dining. At this time, the “jailbreak” didn’t really offer much to Android phone owners, aside from more access to Android’s core functions. These could be useful for future application development, so I wouldn’t be surprised if that rogue online community gets back to work on “jailbreaking” Android again.

And then Google will release another update to fix that exploit. And then the community will jailbreak it again. Do you get a sense of where this is going?