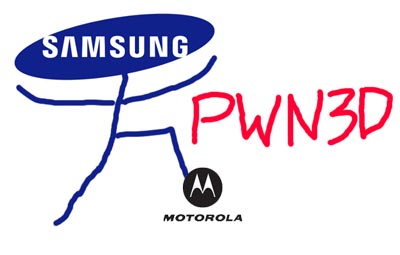 When mobile phones were first hitting the commercial market, Motorola was pretty much the be-all and end-all of the market. Motorola later got challenged by a number of different competitors, but it rose back to the occasion with the emergence of the RAZR line of super-slim flip phones? Well, it seems that the RAZR wave has subsided into a kiddie pool, because Motorola is no longer the number one handset manufacturer in the United States.

That glory-filled throne is now occupied by Samsung, a company that has been working hard on approaching just about every segment of the cell phone market. Despite tough economic times and slowed growth across the board, Samsung managed to increase sales in the United States by 6.2% in the past year. This bumps its American market share to 22.4%.

Motorola, on the other hand, saw its market share drop by a terrifying 11.6% over the same period, resulting in a current market share of just 21.1%. That’s still a sizable chunk of our mobile dollars, but it’s nowhere near where Motorola used to stand.

Nokia is the largest cell phone maker in the world, but it has yet to establish a huge presence in the United States for whatever reason. The Finnish firm held firm at about an 8.4% market share. I’d imagine that Nokia could snag more market share by flooding our operators with a wider range of handsets. Give us plenty of N-series and E-series smartphones, Nokia! Not everyone can afford the unsubsidized price of unlocked handsets, so making headway with cellular operators is the key.

And Samsung knows it. Motorola, on the other hand, continues to struggle. It’s really got to give up on the RAZR and try something radically different.