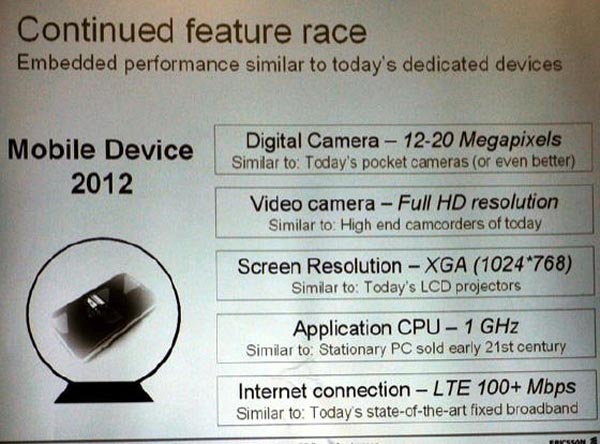 Looking to the future of cell phones, Ericsson of Sony Ericsson fame believes that it will be able to take what phones can do today and push them to whole new frontiers. Looking at the proposed roadmap, Ericsson doesn’t seem quite as interested in producing new features as much as it is interested to doing what it’s already doing, only better.

Shown here, as far as I can tell, is a slide from a PowerPoint presentation and its speaks to Ericsson’s ambitions for mobile devices in 2012. At the top of the list is the inclusion of integrated cameras. At present, most cell phones are doing at least 2 megapixels and some are pushing the envelope in the 5-megapixel to 8-megapixel range, but Ericsson isn’t going to stop there. They plan on having cameras with 12 megapixels to 20 megapixels. I think 12MP is easily achievable in the next 3 or 4 years, but 20 is pretty ambitious.

Continuing with the digital imaging front is the ambition of HD video recording. This feature has recently been implemented in a number consumer-minded point-and-shoot digital cameras, so it’s probably not much of a stretch to include some form of this functionality to camera phones as well. That said, Ericsson wants functionality “similar to high end camcorders of today.” That would mean that 720p won’t cut it. That would also mean that these phones would need a lot more storage.

Continuing down the line, we find the goal of XGA (1024 x 768) displays for mobile phones. With the arrival of phones like the HTC Touch HD, we’re already seeing WVGA (800×480). That’s a quantum leap beyond the standard QVGA that we find on far too many handsets. I’m not sure if XGA resolution will look that much better than WVGA, but you’ll be able to cram more icons, that’s for sure.

Rounding out Ericsson’s ambitions are an extra speedy 1GHz processor and LTE 100+ Mbps mobile broadband Internet connection. Both of these sound like severe battery hogs (as do the XGA display and HD camcorder), so I hope that Ericsson’s got something in the works to address power concerns too.