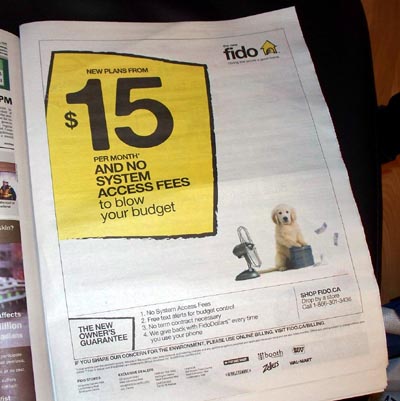 Earlier this week, we saw the official relaunch of the Fido brand in Canada, ushering in yet another value-minded cellular option for Canadians on a budget. Up until the relaunch on Tuesday, Fido was suffering from quite the identity crisis and no one really knew what to do with the poor puppy. Instead of moving Fido further upscale with more handsets like the iPhone, Rogers decided to bump the brand down to better compete with Solo, Virgin, and Koodo.

While the Koodo Mobile launch by Telus Mobility was more of a concerted effort, watching the rollout of ads, stores, and the new website all at the same time, the transition for Fido hasn’t been quite as smooth. This is largely because the Fido brand already existed before this relaunch, so we’re still seeing some inklings from the “classic” Fido, so to speak.

Well, the Fido relaunch is slowly going through its transition period and we’re starting to see a greater marketing effort to introduce us to the new dog. Let’s see what Rogers had done so far.

This was perhaps the easiest arena to update, because the engineers and designers could work behind the scenes in developing the new website without affecting the older site. As a result, the new website was launched alongside the press release on early Tuesday morning.

You can see that the branding on the new Fido website is similar to that of Koodo Mobile, heavily playing up the fact that none of the plans have the system access fee, all of the plans come bundled with text messages, and the cheapest plans starts at just $15 plus taxes. The site is meant to look simple and affordable, almost like you’re walking into the dollar store or Walmart.

The color scheme, in this way, has been heavily simplified. You’ll see yellow, black, and white just about everywhere and not much of any other color. I guess yellow is supposed to make you feel cheerful (and not think of dog urine).

Shown above is one of the first print ads for the new Fido. That’s from today’s local newspaper and its styling, much like the website, is similar to that of Koodo Mobile. Again, it plays up the $15 plan and the absence of the System Access Fee. Just like the website, the print ad is also largely occupied by a yellow, black, and white color scheme.

When I first saw the new simplified Fido logo, I thought that it was strange that it depicted a dog house rather than an actual dog. At the same time, the old Fido logo didn’t really have a canine in it either. The slogan is “Giving low prices a good home”, so I guess the dog house is where we want to live. That doesn’t sound pleasant, if you ask me.

For some reason, the branding makes me think of the Real Canadian Superstore, even though the supermarket’s primary brand color is green (but it uses yellow too). You’ll also notice that the number 15 takes up almost the entirety of the ad. Talk about trying to grab your attention.

Retail Stores Aren’t Quite There Yet

Walking over to the local shopping mall, I popped by the official Fido store to see if they have done any major renovations to represent the new branding. This was yesterday and, not surprisingly, almost nothing has been done to the store.

The signage at the front is still the old Fido logo and many of the promotional posters on the wall are still in line with the old branding. Seeing how Fido handled the print ad, we can expect the depiction of “real” dogs to continue, so it wouldn’t take much to change those posters to the new branding. Swap out the logo, replace the black background with a white one, and throw a splash of yellow.

For now, the only new branding that I saw at my local Fido store was a stand with some new pamphlets. I’ve circled those in red in the picture above. I can see the yellow Fido logo on those handouts, but there really isn’t anything else at the store with the new logo or the new brand message.

So, there you have it. If Fido wants to succeed with building huge brand recognition in time for the holiday shopping season, it’ll want to ramp up its marketing efforts and kick those store transitions into high gear. I haven’t even seen a new TV ad yet, nor have I seen any online advertising. In due time, I suppose, but a massive simultaneous blitz would’ve been a better idea, methinks.