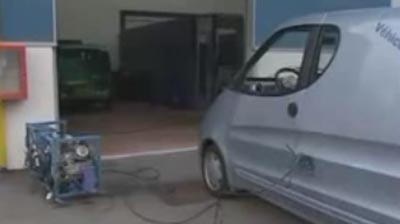 Although gas prices aren’t nearly as high as they were a few months ago, we’re all not happy about how much it costs to fill up a tank at the pump. In responding to this ongoing trend, the major automakers have slowly started to make some headway into creating more energy-efficient vehicles. They’re making them physically smaller with smaller engines and lighter materials. They’re tossing in hybrid technology and considering biofuels. They’re building hybrids and so on, but none of them are quite as environmentally friendly as this creation.

The amazing thing about the car depicted in the video below is that it does not require a single drop of gasoline. In fact, it runs on air. No, we’re not talking about any kind of special fueled air or anything like that, because you simply top up the “tank” on this little vehicle using a standard air compressor.

Why is it, then, that you have never heard of this car? Well, the French company that has been working on its development for the last 15 years has done its best to stay away from the mainstream financial system, because the banking system is highly intertwined with the oil industry. They didn’t want their interests to be compromised by a relationship with Exxon or Shell in any way.

The compressed air that powers this car is enough to get its pistons going and, as a result, there are no toxic emissions whatsoever. A full tank of compressed air, which costs about $2-$3, can boot this car around town for about 200 km. It’s not the fastest thing in the world, as you can imagine, but the Air Car can approach speeds as high as 110km/h.

They’ve also kept the cost of the car surprisingly low as well, setting the price at around 3,500 Euro for the cheapest model. Based on current exchange rates, that’s under US$5,000.