I thought about getting a picture of the Incredible Hulk and chopping it up so that it would show Steve Ballmer saying something like, “Ballmer smash!” but it’s not really appropriate. It’s not that Ballmer isn’t capable of something like that; it’s that Windows Mobile isn’t exactly in any position to do any real smashing at this point.

Many pundits are saying that Google Android could become a very viable contender in the smartphone market, but Steve Ballmer of Microsoft just doesn’t get it. He just doesn’t understand the business model being deployed, but then again, Microsoft didn’t really get Google when it first came out either. Which search engine is preferred now? Google or MSN Search? 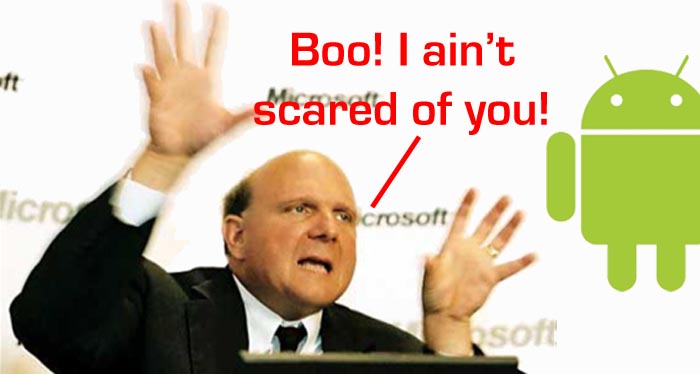 Whereas Microsoft continues to charge handset manufacturers to load their smartphones with Windows Mobile, Google (and the rest of the Open Handset Alliance) is freely offering Android for installation on a wide variety of handsets. Android is free and Steve Ballmer is saying that the creation of this free, open-source platform is a “financially unsound” move for Google.

More specifically, Ballmer doesn’t understand how Google can give away the Android OS for free, only to be charged by handset manufacturers to load Google as the default search engine on the resulting phones. The guys at Google are clearly seeing something that Ballmer is not.

Ballmer continued with his Android bash-fest by saying that Microsoft has no reason to concern itself with the new mobile OS, at least for now. “Google doesn’t exactly bubble to the top of the list of the top competitors we’ve got going in mobile.” Yup, WinMo needs to concern itself more with the iPhone and BlackBerry. Ballmer did remain somewhat tentative, however, adding that Google “might [be a major competitor] someday. But right now…” Not so much.