Many of the new video games on the market are a great source of frustration for me. I’ve had friends tell me that I really need to play Call of Duty 4 or Metal Gear Solid 4, but those games just anger me. I yearn for the simpler days when controllers had two buttons and your character could only go to the left or to the right.

If you have a hankering for nostalgia and you appreciate the ability to game on the go, then you’ll probably be an instant fan of this specially-designed NES portable. It takes on a shape that is very similar to the original Game Boy, but it has thankfully done away with the puke green display in favor of a color one. Too bad the display is so bloody small. I do like the use, as far as I can tell, of real NES controller components though. 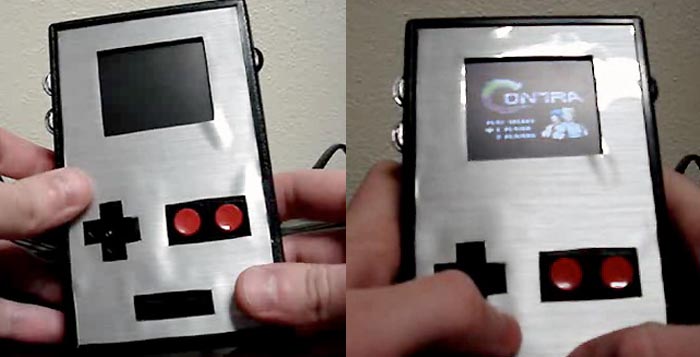 The pocket-sized portable won’t have enough room for you to shoehorn actual NES cartridges, but it does take advantage of the Super Joy III Nintendo clone, offering you access to 72 games. Among the list are Super Mario Bros. and, my personal favorite, Contra. I’m hoping that the Konami code works here, because there’s no way I’m surviving on just three lives.

Power comes by way of four AA batteries. No, this homemade portable NES won’t be able to compete directly with the Nintendo DSi or the PSP Brite, but it will take you back nearly 20 years into the golden age of NES gaming.