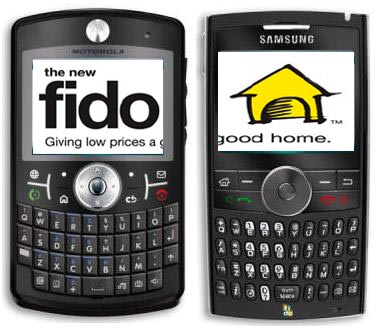 As you may have heard, Fido relaunched earlier this week with a whole new brand image and a whole new market direction. It’s obvious that Rogers is positioning the Fido brand to better compete in the budget entry-level end of the market, setting its sights against such operators as Virgin, Solo, and Koodo.

Like Koodo Mobile, the new Fido includes text messaging with every monthly plan. Some people may argue to the contrary, but I still think that QWERTY phones are, by far, the best option for this kind of functionality. And Rogers seems to agree. An unsubstantiated report on HowardForums is saying that more QWERTY phones are coming to Fido. This comes from some sort of company meeting and it seems like the guy breaking the news is also breaking some sort of non-disclosure agreement (NDA) by letting it leak on the web.

Given the new penny-pinching direction of “yellow” Fido, it follows reason that these new keyboard-touting phones could very well be the QWERTY dumb phones that seem to be all the rage over at the CDMA side of things. This makes sense, since Koodo has the LG KEYBO, Solo has the LG Rumour, and so on. Lots of people want QWERTY without the added luggage of a smartphone OS.

But wait. There’s more. The HowardForums rumor goes on to mention that BlackBerry is indeed coming back to Fido, but not in the form of BlackBerry Connect. In this way, we could very well be expecting something like the BlackBerry Pearl Flip as a way to introduce budget consumers to the BlackBerry brand.

Further still, “a new data phone in general” is being introduced, but there are no further details. As it stands, the iPhone 3G is the primary consumer-minded data phone from Fido. The Motorola Q9h and Samsung Jack have more of a business slant to them, but it seems that they might be phasing those out so that the new phone lineup can be more in line with Fido’s new brand image.