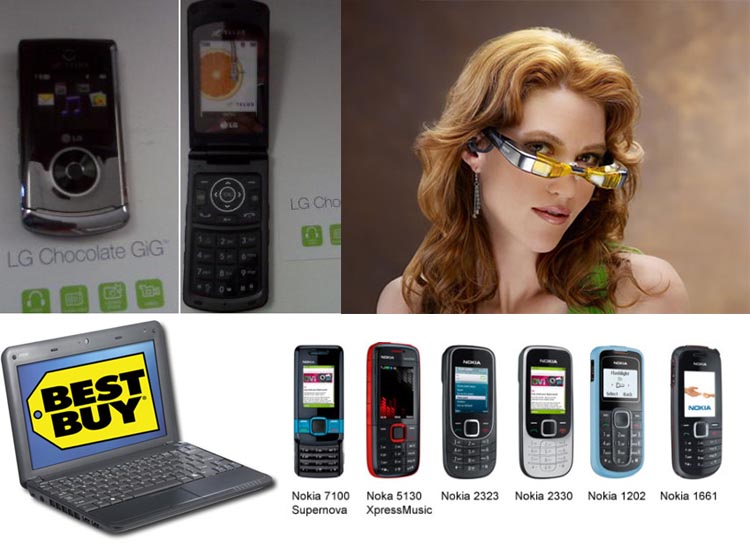 In an effort to keep you guys as up to date as possible on the world of mobile technology, I thought it would be a good idea to do these news roundups from time to time. Love it or hate it, feel free to let me know. On with the news!

Digging the look of Cyclops from X-Men or Geordi La Forge from Star Trek: TNG? If you also happen to be a fan of Apple-fueled entertainment, then you’ll be glad to hear that MyVu Eyewear now works with the iPhone. The $300 Myvu Crystal is particularly impressive, but don’t be surprised if you get jumped by some hooligans while wearing these video glasses.

Telus is in love with Chocolate phones, so it’s not at all surprising to find the LG Chocolate GiG heading that way as well. Also known as the Chocolate 3, this is a flip phone with a musical twist.

Dell isn’t the only one redefining the netbook market with bigger mini-laptops. It seems that Asus has a 12-inch Eee PC in the works as well. This will be a larger variation of the S101 and will be a part of the ZX series. Pricing is expected to be in the $600-$900 range.

Speaking of subnotebooks, the MSI Wind just got cheaper. Jumping on over to Best Buy, you will find that Wind U100 available for just $350. It wasn’t that long ago that this thing sold for $500!

Might I interest you in a BlackBerry in a Box? It seems that Research in Motion is working on the possibility of prepaid BlackBerry devices, targeting people on a limited budget or those who cannot get approved for post-paid plans.

While it’s easiest to drool over something like the N6 or E71, Nokia knows how to approach emerging markets too. In fact, the Finnish company has at least six new low-cost phones for places like India and China. They’re all candybars and most appear to be musically inclined.