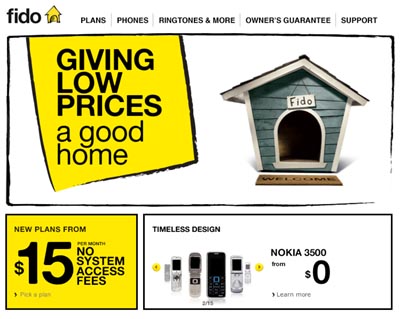 We knew it was going to happen and now it’s officially here. Rogers Communications has officially relaunched Canadian cellular provider Fido with a whole new public image, a completely refreshed branding message, and a whole slew of new pricing plans. Is this a good thing for consumers or is it more of the same packaged in a different way?

As mentioned before, Fido is being repositioned in the market to better compete against the budget-minded providers like Virgin Mobile and Koodo Mobile. In fact, the completely redesigned Fido website immediately brings in all sorts of comparisons to Koodo, including a much brighter color scheme and a simplified logo. Gone is the black and gold website promoting the iPhone 3G. In its place is a vibrant white and yellow scheme that is meant to bring a greater sense of energy. You’ll also notice that the logo has been changed to that of a dog house. The slogan, it seems, is “Giving Low Prices a Good Home.”

I said that Fido was experiencing an identity crisis, but now the branding is much more clear: Fido is a budget brand, largely competing against MVNOs and the Koodos of Canada.

The new monthly plans from Fido are eerily similar to Koodo Mobile. First, Fido has officially abandoned the System Access Fee and the 911 fee, effectively reducing your bill by $7.45 a month. All current customers will be grandfathered in with their existing plans, but this means that they must still pay the SAF and 911 fee each month. They can opt for one of these new plans instead to get rid of the SAF, but there is a one-time $25 fee to do so.

The cheapest monthly plan is $15 (no SAF) and includes 50 anytime minutes (by the second) and 50 sent text messages. This again follows in Koodo’s philosophy of including SMS with every plan. Moving up from there, you’ll find plans at $20, $25, $35, and $50 for varying numbers of minutes, evenings and weekends, and included text messages. The $25+ plans include unlimited SMS. 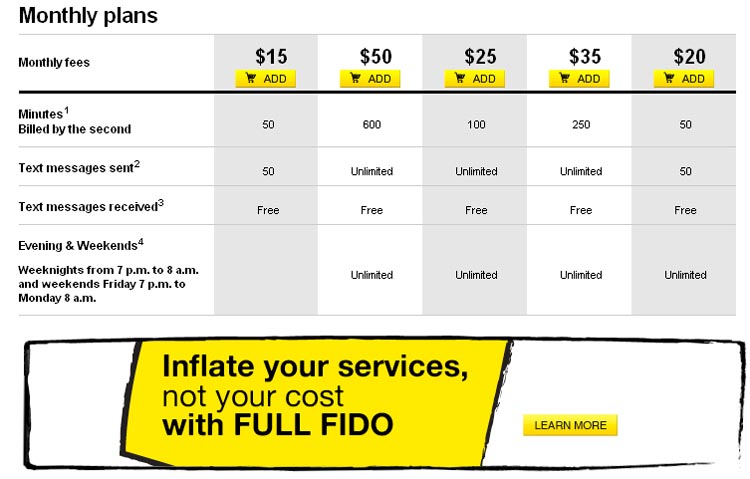 Missing the old City Fido? The dog is bringing back a suitable replacement in teh form of the $40 FullFido plan. Included in that price are 2000 anytime minutes and unlimited text messaging. The value packs and options have also been updated.

One other noted additions is the introduction of the new owner’s guarantee. This includes the abandonment of the SAF, an automatic text message telling you when you reach 75% and 100% of your monthly airtime allotment, a maximum 2-year contract for non-iPhones, and the continued support of the FidoDollars program.

Working out the math, I would only save about $2-$3 a month under the new plan structure and I would have to pay a $25 fee to migrate. In this way, it’d take me a year to just break even! I was hoping for so much more and, if the rumblings on Howard Forums are to be believed, there is more on the way. Let’s hope so.