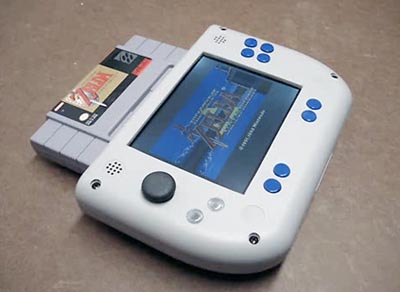 Generally speaking, the Nintendo DS is just as powerful as the old Super Nintendo Entertainment System. With the arrival of the Nintendo DSi (in Japan) and the launch of the online store for the touchscreen handheld, we could be in store for all sorts of Virtual Console titles on the DSi as well. In this way, you could relive classics like Street Fighter II and The Legend of Zelda everywhere you go.

Yes, the Sony PSP is already home to a couple of great SNES emulators, but do you still have SNES cartridges kicking around? Maybe this homebrewed handheld is more your kind of thing. A modder has managed to construct a rather massive portable gaming machine that accepts those old SNES cartridges. Seeing how some of those games are over 15 years old, you may have to resort to the old blowing technique. Then again, people say that this damages the connection and renders some cartridges inoperable.

The so-called Retro Duo handheld pictured here looks to be larger than even the old Sega Game Gear, but I guess it had to be at least that big to accommodate full-sized SNES cartridges. Power comes by way of internal lithium batteries, so you can have some assurance of uninterrupted gameplay. Other noted features include a headphone jack, second player port (!), and a digital joystick. It’s curious that the modder wouldn’t use a d-pad, seeing how the original SNES controller did that instead.

The real question, of course, is why would you even want to have a handheld gamer like the Retro Duo when the Nintendo DSi will soon be able to do the same thing. I realize that you’d be entering a legal gray area, but with the proliferation of SNES ROMs and the relative adequacy of many SNES emulators, wouldn’t you get a better experience that way? I’d imagine that many of these cartridges would start to exhibit problems after all these years.

I guess this is a proof of concept than anything else, so I applaud the enthusiast for piecing this thing together.