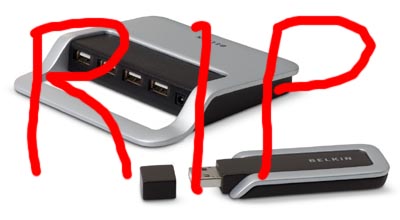 There exists a push to make everything wireless. I don’t know too many people who have their computers physically connected to their routers via an Ethernet cable anymore. Wi-Fi is just so much more convenient and its performance isn’t that far off from a wired connection. The same can be said about Bluetooth headsets for cell phones. Why would you want a wired headset? Video game controllers are much the same way.

At CES 2008, I saw several companies showcasing a series of wireless USB products, but there’s not nearly as much attention being paid to that technology anymore. It sounded so convenient to have wireless USB, because you could access peripherals and accessories without having to deal with messy cables. Unfortunately, it seems that the technology is dead and buried. Or at least it’s a couple feet deep already.

WiQuest is a major player in Ultra-Wideband (UWB) technology, which plays an integral part of the wireless USB technology. According to GigaOM, WiQuest has kicked the bucket and as such, UWB is falling out of favor. Continuing with the domino effect, this means that development and advancement of wireless USB has hit the backburner as well. Unless someone picks up the slack, you may as well place a grave marker next to wireless USB.

At the same time, this is almost a chicken-and-egg scenario. Apparently, the reason why Texas-based WiQuest fell in the first place was that the company was unable to make UWB a viable product for the marketplace. They couldn’t resolve the technical difficulties involved and “the chips they produced… were not accepted by those who would use them.” One of the major problems was power consumption. Aside from the requirement of two separate chips, the UWB technology used a full watt of power. That’s too much.

If you’ve been holding your breath for wireless USB technology to hit the mainstream, you should probably let that air out before you turn blue. Then again, by now, you’re probably already turning purple.