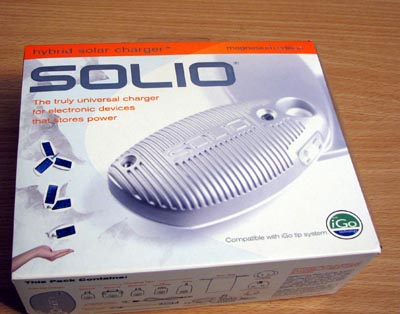 On my personal blog, I stated that my greatest environmental sin was my heavily reliance on electricity. I’m not running the dishwasher and the clothes dryer all day, but I do have my TV on pretty well all day, as well as a number of other electronics and gadgetry. I’m not particularly proud of this, but at least companies are starting to provide us with greener options while still allowing us to indulge in our gadget-fueled fetishes.

One such product is the Solio Hybrid Solar Charger, Magnesium Edition. In a nutshell, this little portable charger can soak in some extra power one of two ways. You can plug it into the wall and use it as a portable power pack. The alternative, which is a much greener option, is to fan open the Solio Magnesium Edition to reveal three solar panels. Using this configuration, as you can probably guess, the Solio can soak in the sun’s rays and translate that power into something you can use on your BlackBerry, iPod, or cell phone. In fact, it’ll work with just about anything that can take USB power.

Features At a Glance

Depending on how much you use your cell phone, it is perfectly conceivable to rely completely on the Solio Magnesium Hybrid Charger for all of your mobile phone needs. Just leave the solar panels out on your window sill every day and by the time you need to charge your phone, the Solio should have enough juice to top you up.

This is truly meant to be a universal charger, because there is a standard miniUSB port on the side. Using the provided cable, this charger is also compatible with the Universal iGo tip system, so it’ll work with a wide variety of portable electronics. There are iGo tips for just about everything.

In terms of technical specifications, the Solio Mg can store a maximum of 1800 mAh, which can then be distributed to your mobile devices. This is a 3.7V lithium ion battery. If you’re running a little low on sunshine, you also have the opportunity to plug this thing into the wall for power. The Solio Hybrid Solar Charger measures 120 x 65 x 34mm and weighs 179 grams.

In keeping with the green mentality, Solio has done its best to minimize environmentally-unfriendly packaging. The box is cardboard and the inserts are cardboard as well, so they can be recycled or reused. Unfortunately, the various accessories that come with this charger are in plastic bags. That’s a green no-no.

In terms of what’s included, you get the charger itself, a series of iGo tips, a pencil (used to prop up the Solio at the right angle), a hemp pouch, and a wall adapter. Check out my hands-on video above for a better look.

The beauty of the Solio Magnesium Hybrid Solar Charger is in its simplicity. There really is nothing to it and this handy device does exactly as advertised. As you could see through the video above, the Solio only fans out in one direction and this ultimately aids in its solid build quality.

It’s good that both the miniUSB and power ports are protected with a small rubber cover, though I find the use of a pencil to prop up the charger to be a little strange. Would it have been better if there was a pop-out leg of some kind, much like what you’d find with standard picture frames and the like?

In an effort to be as energy efficient as possible, the Solio Hybrid Charger doesn’t have any sort of real display. Instead, the “action” button, so to speak, is also the indicator light. You can tell how much power is in the internal battery by the number of flashes it emits when pressed. Simple, but effective. 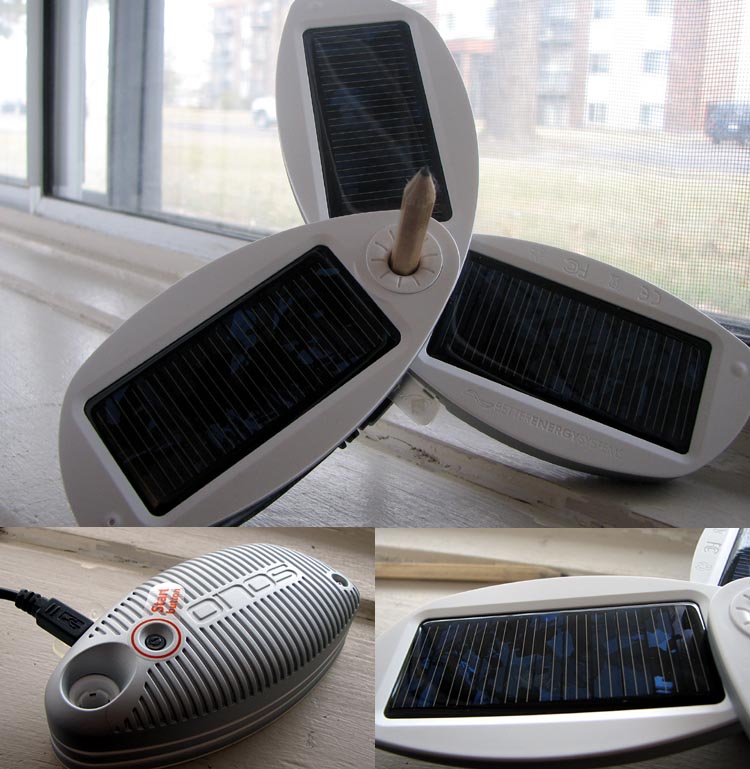 I also appreciate the inclusion of the handy hemp pouch. This makdes the Solio Charger much easier to haul around during travel, because it gives you a place to stow the necessary cable as well. I’d probably stick to no more than two cables at a time, if only to avoid unnecessary tangles and bulk.

The single greatest thing that would deter someone from considering the Solio Hybrid Solar Charger Magnesium Edition is the sticker price. It’s listed at a somewhat hefty $169.95, which sounds pretty expensive for “just” a charger. For that price, I’d almost expect it to do more than that.

Overall, Solio has done a good job in creating a green environment. If you use your iPod, cell phone, or other portable electronics quite a bit and find yourself in constant need of power, this Hybrid Charger is certainly a greener option than plugging into the wall all the time.

Build quality and overall design is great, and the integration with the iGo tip system makes the Solio Universal Hybrid Solar Charger Magnesium Edition (what a mouthful!) quite the versatile charging solution. I just wish it was cheaper and had a larger battery.