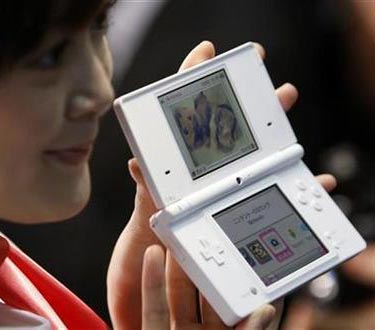 The new Nintendo DSi handheld was announced earlier this month and now it’s ready for public consumption. If you happen to find yourself over in Akihabara, you’ll have the chance to snatch up the latest hotness from Nintendo starting tomorrow. Based on the time difference, I guess that’s only a few hours from now that you’ll be able to buy the Nintendo DSi.

As you recall, the DSi is effectively identical to the existing Nintendo DS Lite, but it’s got larger screens, dual cameras, music playback, audio enhancements, and an SD memory card slot. The price for Japan has been set at 18,900 Yen ($192).

Oh, and before you get any bright ideas about importing the DSi over to North America, you’ll want to know that it is region-locked. Apparently standard DS games will work though. The American version of the DSi won’t be ready for retail until next summer.