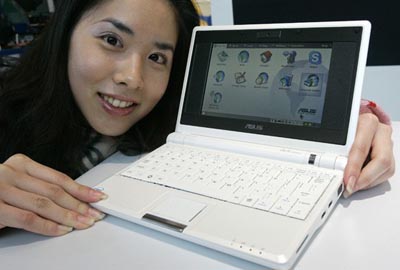 Is price still holding you back from buying a netbook? Even though these subnotebooks are cheaper than their full-sized counterparts, some people still think that these netbooks cost too much. Asus sympathizes with the penny-pinchers in the audience, because the Taiwanese computer giant plans on releasing a $200 Eee PC next year.

As you may already know, it is currently possible to get an Asus Eee PC for under $200, but that price only comes with a wireless broadband contract from select providers. Asus president Jerry Shen says that his company will have an el cheapo Eee for about $200 without contract or obligation.

Naturally, you shouldn’t expect an Eee PC 1000H for that price. More likely than not, it’ll be some variant of the Eee PC 700 or 701 and it’ll be powered by Linux. Jerry did not mention when in 2009 the sub-$200 Eee will drop, so it could be early or it could be Christmas.