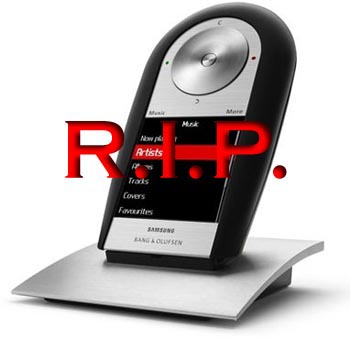 Normally interested in the market for high-end audio equipment, Bang & Olufsen made an attempt at selling premium cell phones. Unfortunately, that attempt turned out to be quite the flop and that’s why B&O is throwing in its mobile phone towel.

As you may recall, Bang & Olufsen turned to Samsung to produce both the Serene and the Serenata, both of which featured some rather unique designs and not much in terms of innovative functionality. The price was too high (the Serene was 1100 Euro) and not the phone’s weren’t Swarovski-esque sparkly enough, I guess.

Cutting its losses, Bang & Olufsen has abandoned its mobile phone department. Maybe it should try making an iPod-killer next.