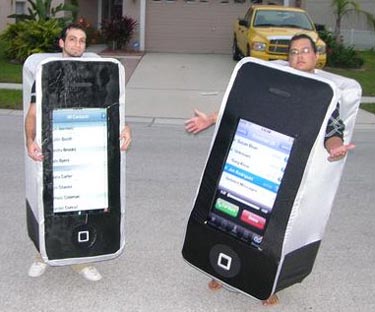 On Friday, the young ones will b3e going door to door soliciting free candy from their neighbors. The older ones will be heading to clubs and parties so that they can get inebriated out of their minds. Where do the geeks fit into this spectrum on Halloween?

Sure, you could spend an afternoon fashioning a makeshift iPhone costume like these two weirdos — Is the guy on the right not wearing any shoes? Seriously? He’s freaking barefoot! — but it might be more fun to scare the crap out of your buddies with some nice Halloween-themed gadgets. Geeks can appreciate a good scare from time to time too.

Some people take the term “USB thumb drive” a little too literally, because they have literally produced a USB flash drive shaped like a human finger. As you can quite plainly see, this is not a thumb, so it’s more appropriately called the USB finger drive.

There’s even some faux blood on there, so it can almost look like some ghoulish figure is sticking his finger out of your notebook. Yeah, it’s just for cheap gags and there’s only one gigabyte of storage, but it’ll help break the ice in between TPS reports.

For people who don’t have the stomach for random body parts, there is the much more kid-friendly Ghost Mouse. The Ghost Mouse comes from a Swiss company called Pat Says Now. The inverted tear has the appropriate black spots to give you a Scream-like ghost. Too bad it doesn’t come with any sound effects. It’s also too bad that it’s wired, making it almost as lame as those paper ghosts on strings.

If you’ve got a sick and demented sense of humor like me, then you’ll appreciate this Teddy Bear USB flash drive. Normally, these cute and cuddly stuffed animals make wonderful gifts for girlfriends and little children, but this one could be a little too disturbing.

All you have to do to use this flash drive is to decapitate the bear and shove its neck into your computer. The result? A teddy bear that looks like it was stuffed into a USB port. Awesome. 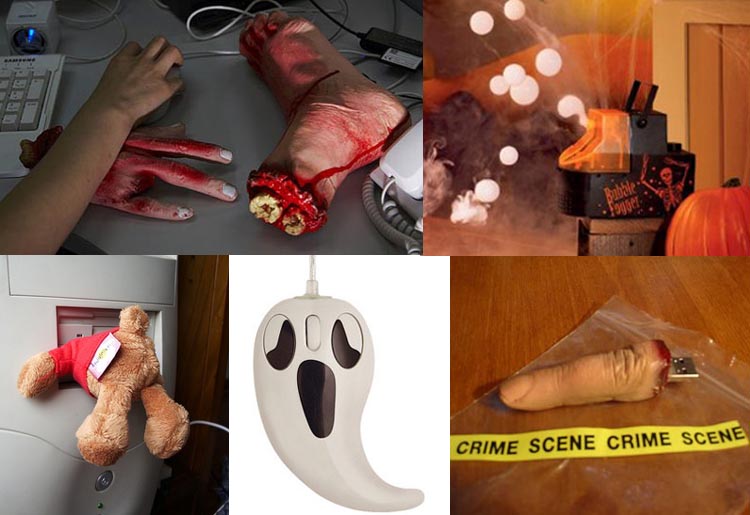 Severed Limbs to Rest Your Limbs

Is that bloody finger USB drive not creepy enough for you? While these severed limbs aren’t really “technology”, so to speak, they will come in handy at your desk. These are wrist rests shaped like chopped-off hands, severed arms, and removed feet.

It’s hard to tell from just photos, but these look almost good enough to be props on CSI. Grissom would certainly approve.

Are you hosting a Halloween party at your house? Before you put on your Steve Jobs or George Lucas costume, be sure to set up this Bubble Fogger Machine. As its name implies, this machine combines the utility of a bubble machine with a fog machine. As each of the bubbles pops, it releases some fog into the air.