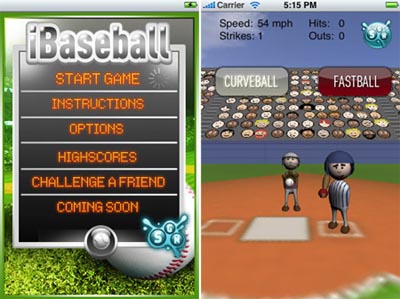 The World Series may reach its conclusion tonight, but that doesn’t mean that you can’t experience America’s favorite pastime during the winter months. Heading over to the iPhone and iPod touch is the new iBaseball mobile game from SGN.

Following up on the success of iBowl and iGolf, iBaseball is exactly what you think it is: a mobile baseball game for your iPhone. The built-in accelerometer is used extensively in this game, because you get to wave your handset around to perform the various actions.

You may look like a goof on the subway, but iBaseball only costs $0.99 from the App Store.

UPDATE: I just got a message from Felicia Mowll, the PR rep for SGN. She tells me that iBaseball is free and not 99 cents, so there you go.