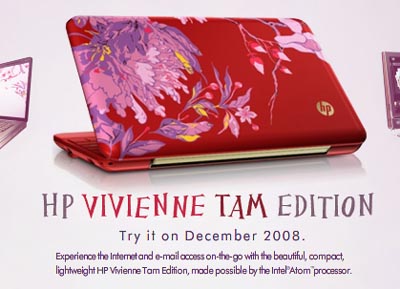 We’re not completely sure if this is simply the HP 2133 Mini-Note with a dressed up casing or if it’s a new netbook altogether, but what you see here is quite possibly the most fashionable subnotebook to date.

Whereas most of the units on the market have a rather plain appearance, the HP Vivienne Tam Edition netbook bursts with style. I don’t think that this will appeal to the more masculine among us, but it could be a huge ticket in for the more feminine crowd. The exact specs have not been revealed, but it’s safe to say that it’ll be powered with Atom and it’ll probably have a 10-inch screen like the 2133.

Either way, we’ll find out more about Vivienne Tam’s HP netbook soon, because it’s going to launch in December.