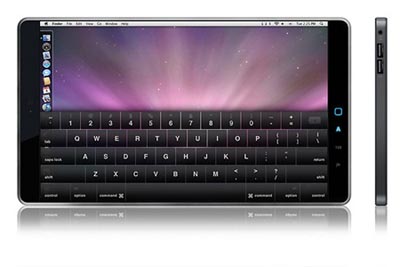 Didn’t I talk about this a while ago? We’ve got the Apple iPhone and we’ve got the MacBook, but what about something in between? According to Steve Jobs, they could have something in the works that fills that void.

More specifically, the Jobsian one showed up as a “special guest” during the Apple quarterly earnings call and he dropped a couple of bombs. Well, they were hints of bombs. Hints of bombs to come. In talking about the netbook market, Steve said that there are “not a lot of them getting sold”, so he didn’t really think that it was worthwhile. He said that the iPhone fit the bill for portable web surfing.

After saying that, however, the Apple head honcho went on to say that Apple has “got some pretty interesting ideas if it does evolve.” Could we be looking at an Apple MacBook Touch tablet? UMPC? Subnotebook?