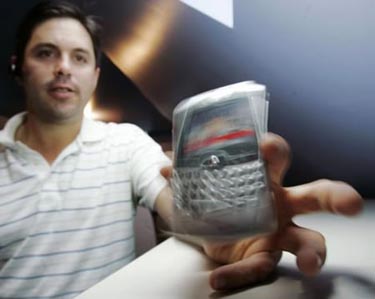 It can already be a little startling when your phone vibrates in your pocket, but researchers at University of California San Diego want to take mobile phones to a much scarier level. Just in time for Halloween comes news of research that could see future cell phones spooking the crap out of you.

Instead of a rather harmless jiggle in your purse or hip, the new cell phones could give you the sensation of a tap on your shoulder or someone rubbing your hand. There’s no explanation on exactly how this would work, but the report is coming from the Cognitive Science wing of UCSD, along with some help from Microsoft and others. Can you imagine if every time your phone rang, it felt like someone was breathing on the back of your neck.

Shudder. It’s probably going to take a while for this technology to hit the market (if ever), but it’s certainly something for you to think about when you trick-or-treating next Friday.