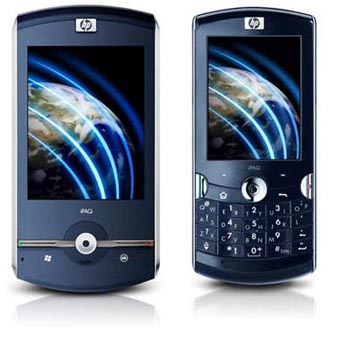 Just when you thought that HP threw in the mobile phone towel, the computing giant is back with a couple of new iPAQ smartphones. The older HP IPAQ smartphones were pretty clunky, but many people applauded their toughness and utility. Will they say the same about the new HP IPAQ Voice Messenger and the IPAQ Data Messenger?

From what I can tell, both phones will be powered by some version of Windows Mobile and will be geared largely toward the business crowd in Europe. The Voice Messenger is the phone on the right and it takes on a similar keyboard as the SureType found on the BlackBerry Pearl. This helps to reduce the size while still providing enough usability for mobile emails. The HP IPAQ Data Messenger, on the other hand, seems to have a touchscreen and possibly a slide-out QWERTY keyboard.