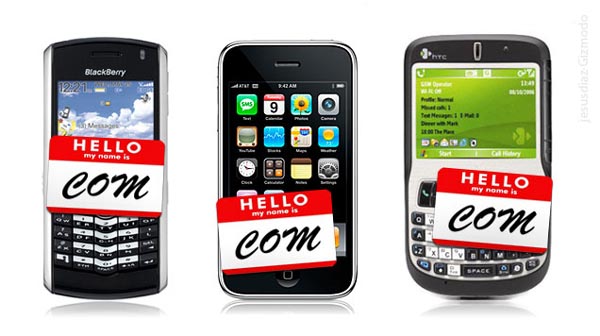 It’s obvious enough that we don’t just use our cellular phones for just the “phone” part of the equation anymore, so it is a misnomer to refer to these devices as smartphones? Whether you’re talking about the latest BlackBerry, a hot new Windows Mobile handset, or even the Apple iPhone, these all seem to fall under the umbrella term of “smartphone”, but is that really descriptive enough?

Jason Chen of Gizmodo argues that we should completely abandon the term “smartphone”, because very little of what we do on our phones these days is actually a “phone” function. We spend much more time listening to music, sending emails, taking pictures, surfing the web, organizing our schedules, and doing all sorts of non-phone kind of things. So, what term does he propose in place of smartphone? Com.

His argument is that “com” can be short for both computer and communicator. Both terms are more descriptive of these mobile devices, he argues, but I think that using “com” will just cause confusion. Let’s cast the Star Trek Comm (communicator) aside for a moment, because I think that most people would associate “com” with “dot com”. I agree that we should probably come up with another term, but “com” ain’t gonna cut it.